The “Minimalistic Setting” in Wagner’s Prelude of Das Rheingold
The musical extract typically shows three significant Romantic traits: sublime orchestral sonority, kaleidoscopic timbres and prolonging melodic line. The overall mood portrayed in this grand passage is extensively dramatic, profoundly poetic and sensationally moving, rather than elegantly classical or well proportionally symmetrical. Apart from the apparent Romantic appearances, however, this inspiring passage is not without having other novel features that invite further scrutiny.
Although the entire passage lasts nearly four minutes, the musical motion merely depends on the projection of one single element, the Eb major triad. The thematic melody, the sustaining pedal and the orchestral accompaniment are all derived from this Eb major tonic triad and are continuously repeated throughout the passage.   Here the monothematic nature is obvious. The minimal use of materials probably reminds us of Bolero by Maurice Ravel in 1928, which could be regarded as one of the precursors of the Postmodern Minimalism in the years sixty. Bolero only consists of a single Spanish dance theme and a repeated snare drum rhythmic pattern projecting throughout the whole piece. Similarly, this extract exactly reflects such conspicuous feature.

Another significant characteristic worthy of considering is the continuous small-scale changes within the repetitions. By adding different instruments to the texture and changing the accompanimental pattern in the inner parts, the musical tension is built up gradually. These changes not only enhance manifold timbres to avoid monotonous, but also thicken the orchestral sonority step by step, providing a gradual growth of dynamic from soft to the climatic loud tutti near the ending, as well as holding the musical tension for the entire passage. As a result, neither a single repetition of the melody nor a harmonic pattern generates the same sonic sound.   This characteristic is very similar to the art painting of Minimal style, the Coca Cola, by Andy Warhol in 1962. In Coca Cola, a matrix of many coca cola bottles of the same size is arranged, but in fact no single bottle is exactly identical.  Doubtless the small-scale change within a repeated similarity is one of the most salient attributes of Minimal Arts. The listening extract, to a certain extent, also possesses such element alike.
In short, this musical passage comprises much novelty and innovation, despite its apparent Romantic outlook. The single Eb tonic triad successfully maintains the entire musical motion and tension. In order to keep the perceptive interest within a monothematic background, the orchestration, timbre, dynamic, harmonic pattern and texture are changing incessantly. This restless small-scale change is the key factor for the gradual growth of musical tension, building up a more complex texture and sonority until the climatic conclusion. The musical extract, therefore, can be regarded as an extraordinary example of hybridization of Romanticism and somewhat nascent Minimalism. 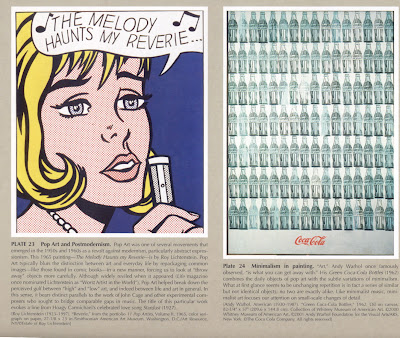