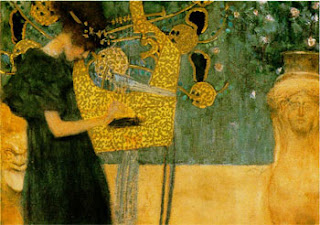 The modernity in Vienna had to start somewhere and this starting-point is synonymous with Gustav Klimt.  His paintings are highly personal symbolized and are as persistent as they are profound, captivating and powerful.[1]  He was favored to employ square canvas and heighten the hieratic effect of gold backgrounds.  His Lavish application of gold leaf anticipated the style of collage.  Klimt also liked to use tiny flecks of color to create mosaic-like surfaces that reflecting the eclectic charm of the hieroglyphs from Egypt, spirals from Mycenae, and floral patterns from Ravenna.  Even more compelling are portraits of women, whose quizzical faces and sensual figures anticipated the image of the vamp made popular during 1920’s after his death.[2]  Therefore Klimt, undoubtedly, was the leading symbol of the modernity in Vienna.

Klimt, in addition, is the central figure of the Secession Movement, an Art Nouveau Movement in Vienna.  Just as the writer Hermann Bahr claimed about the artistic atmosphere in the last decade of Vienna, ‘ Nothing happens here, absolutely nothing.’  Bahr had for some time been pessimistic about the state of painting and sculpture throughout the Habsburg Empire and especially in Vienna.  He believed that the visual Arts in Vienna was too conservative, narrowly provincial and absence of originality and creativity.  Klimt and his contemporaries agreed with Bahr’s critics and they argued that the Viennese artists did not have the opportunity to expose their works to their foreign colleagues.  However, their worries were not unreasonable.  During the last decade of the 19th Century, two principal bodies dominated the visual arts in Vienna: The Academy of Fine Arts and the Kunstlerhaus.  The Kunstlerhaus was in a position to impose not only government policy with regards to arts, but also to influence the formation of public taste, by means of its annual exhibitions.  It was a young organization, founded in 1861, but no less conservative for that.  Although Kunstlerhaus organized exhibitions and sold the work of its members, protected and furthered their interests, its policy was rather narrow and provincial, always looking inwards rather than towards the broad horizon.[3]  It should possess the responsibility to expose the works of the Viennese artists to the world, just as Klimt and his friends always claimed.  Therefore, the revolt against traditional conservatism finally spread to art and architecture.  On 25 May 1987, nineteen artists around Gustav Klimt split off from the Kunstlerhaus.  They searched for new style and new way to express their subjective emotion through their artworks.  Over the portals of the Secession building, the base for the revolutionary movement, Secession proclaimed its aims: To the Age it’s Art, To the Art it’s Freedom.  But none knew what concrete meaning actually was.  It may be the cultural renewal or personal introspection, modern identity or asylum from modernity, truth or pleasure.  However, no matter what was the real meaning behind, the components in the Secession manifestoes suggested many contradictory possibilities compatible only in one sense: their common rejection of the nineteenth century’s conservatism in Vienna.[4]  The success of the modernity in Vienna seemed near.

Unfortunately, the road of modernity is not easy as the Secessionists thought.  Klimt began his ‘Philosophy’ during 1899 and when he decided to show it in a still-unfinished state at the Secession exhibition, the consequence was unexpected.  Painting his new vision and depicting his new allegorical conception to the University project, the ‘Philosophy’, he brought upon himself the wrath of old rationalists.  The controversy, even scandal, and the public reaction wounded him deeply and made him realize that carry out the kind of public commissions he had so successfully completed in previous date, for instance, in the new Burgtheater and Kunsthistorisches Museum, was compatible neither with artistic freedom in general nor his personal favorite.[5]  In the course of the ensuing struggle, painters, public, and even politicians vigorously debated the function of modern art in Vienna.  Confronting such crucial time in Klimt’s life did not scare him off in pursuing of the artistic freedom.  The battle of the modernity, by contrast, brought an end to his role as a mere subverter of the ancient way in his art and led him more strictly attached to the new mission as an artist of real modernity of Vienna and ultimately led to a new, abstract phase in his paintings.


The struggle of Klimt on the road of modernity in Vienna was not wasted.  The crisis over the University paintings led to the confrontation of both the modern and orthodox liberal parties of the University in hostile array and also brought forth the deep debate in the political context.  The debate between two cultures that Jodl, the opponent of Klimt, and Wickhoff, the defender of Klimt, represented –old ethics and new aesthetics – in the university raged on the podium and in the press, but it was in the political context that the issue could be finally decided.[6]  According to Dr. Ernest von Koerber, an able and imaginative official of the Government, the supporting of Klimt meant the supporting of the modernization of Vienna, either in the area of economics or in culture.  Whilhem Ritter von Hartal, the State assistance of the Ministry of Culture in Austria, undoubtedly gladly threw the weight of the State behind the modern movement of the city.  With Hartel’s assistance, the Secessionist Movements achieved the dramatic success.[7]  Modern artists won painting and architectural commissions and teaching posts.

Therefore, the gradual succession of the modern art in Vienna was the insistent effort of the central figure, Gustav Klimt, and the result of Secession Movement. The abstraction and symbolism portrayed in his works depicted the real modern face of the modern man.  Just as Tietze, one of Klimt’s friend, claimed in 1918 after Klimt’s death that “Klimt, German-Bohemian in origin, absorbed the Viennese spirit…. and at the turn of the century he more than anyone else guaranteed the artistic individuality of Vienna.”[8]  The modernity of art in Vienna, undoubtedly, under the valuable contribution of Klimt was then completed.